Just got home to Colorado this past Sunday after spending an inspiring, exciting and hilarious 9 days in the Pacific Northwest.  My trip began and ended in Portland and the entire trip was quality time with the Lovely Sarah.  My main reason for scheduling this trip was the CLF Retreat – Crochet at Cama, that was held at Cama Beach State Park (October 17-21) on Camano Island, Washington.

I flew into PDX the afternoon of the 15th, and Sarah and I spent Saturday shopping and cooking in preparation for our journey north to Camano Island.  Sunday morning I managed to pack Sarah’s little red car fuller than it has ever been before.  In fact Sarah really didn’t believe all the stuff we were taking was going to fit in there (I confess I had my doubts too).  Especially as we were picking up the Brilliant Janet at the Sea-Tac Airport on our way.

Despite a late start beginning our trip north all things worked out perfectly.  The car was certainly filled to capacity once we added Janet’s suitcase and bags to the mix, but we all fit and we traveled safely onward to our destination at Cama Beach State Park. 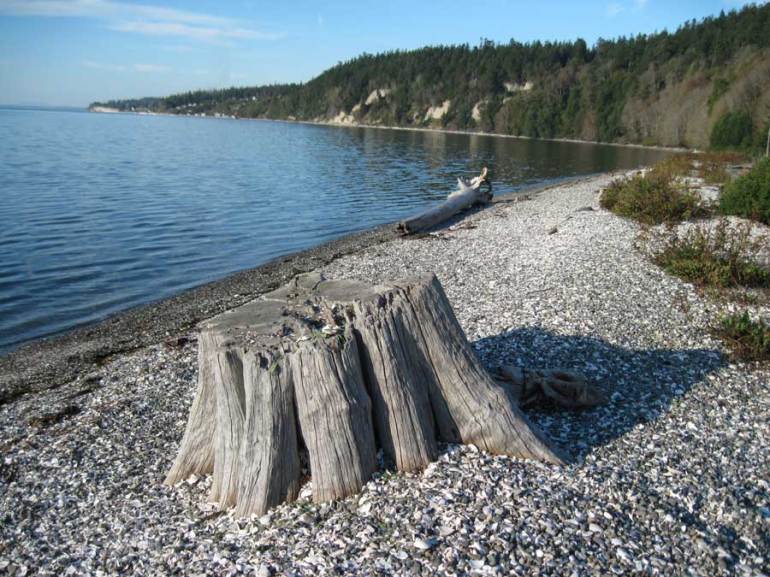 First descriptive for this lovely stretch along the Puget Sound is Wow! When we saw our little cabin and how close the water was to our front porch we were delighted beyond description.

The next 24 hours passed in a bit of a blur.  Sarah, Janet and I got moved into our cabin, grabbed some dinner then headed over to the Firehall to join up with the rest of the folks arriving for the retreat.

Monday morning I had an informative and interesting class with Laurie Wheeler about Yarn.  The next thing I remember is a lovely dinner with our friends Jim (Jimbo) Price and Karen (KRW Knitwear) Whooley.  I was getting a bit antsy at that point as later that evening was to be my debut doing a presentation on Crochet Ergonomics and Hand Health.  My dinner companions jollied me along and helped me set up for the presentation.

Once I was in front of the group and started talking about my subject the audience was a blast.  There were many faces in the crowd that I knew and could call on by name (and my friends refrained from flinging tomatoes as had been threatened before).  Everyone was very interested in the topic and Laurie Wheeler (Fearless leader of the CLF) extracted a promise from me that I will teach at least one class at the retreat next year.

Tuesday morning I was in Karen Ratto-Whooley’s Toe Up Sock class, where I demonstrated my poor pattern reading skills.  My sock did not turn out well. But I had loads of fun and am hopeful that my next attempt will be better.  I’ve decided that it will take lots of stitch markers for me to find the right stitches to work into.  I really want to make sock/slippers for my family for this Christmas.

Karen, as always, was a fun and well prepared teacher.  She even managed to help me figure out what I had done to create such an oddly shaped sock.  The picture was taken after I frogged the 2nd part of my heel flap.

Walking back to our cabin after the class I hiked around and took some pictures of the gorgeous shoreline and scenery.

That evening Jimbo held an auction for a chopstick Bullion hook that he developed with Bonnie Pierce.  Bonnie had signed the hook.  The bidding was fun and Janet and I joined forces to win the bidding.  Using the hook that evening (and with some coaching from Bonnie) I successfully made my first ever bullions.

Wednesday morning was my Hook Whittling class with Jimbo Price.  Another fun teacher and an informative class with lots of students.  I got my hook looking like a hook during the class and did some further shaping of it once I got back to Sarah’s house after the retreat.  I wanted to try and create a hook with a similar shape to the Etimo hooks from the Tulip Company.  I’m still having fun shaping this hook and am not 100% sure I’ve finished carving and sanding on it.

I’ve been playing with wood carving for about 20 years, but I still learned many new things and different ways of approaching the challenges of making the wood into the object you visualize.  As well as new ways of looking at how I hold my hook and what shape is best for my style of crochet.

That evening was the Good-bye party where Deb and Don Burger gave a wonderful musical performance.  Then it was visiting til we were getting too tired and silly.  The next morning was misty and cold which seemed fitting as final hugs and good-byes were shared.

I am looking forward to next year’s CLF Crochet at Cama Retreat.  Mark your calendars and save your pennies to join us there. October 16 – 20, 2011.

Error: Twitter did not respond. Please wait a few minutes and refresh this page.