The end of this week has been a bit disappointing crochet-wise. I had hoped to have a new shawl design all worked out, but instead I ended up making 3 different swatches I was disappointed in and then ripping them out.

My usual designing method is to start with drawing out my stitch pattern and shaping ideas on paper in symbols. Then sit down with yarn and crochet to try out the idea and to determine gauge. Most of the time this works very well, though as this week proves, not always.

This weekend is shaping up to be another snowy one, though not as heavy as what we got 2 weeks ago. I was really wishing I had a crochet project ready to go. Unfortunately I am in one of those odd periods with my crochet work that all I had in my work bag was swatching projects. 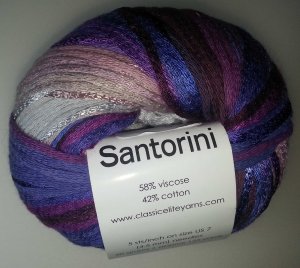 I decided that this was a good time to work with some of the neglected balls of yarn that have been sitting in my stash too long. I have 2 balls of this Classic Elite “Santorini” that I had purchased at the Longmont Yarn Shoppe last year. It’s a very interesting yarn that changes texture and color thru-out its length. Sometimes it has the body of cotton and other times the slinky fluidity of rayon.

I’ve tried a couple of stitch patterns with it in the past and realized that the yarn needs a super simple stitch pattern to really shine. The colors don’t show up with any regularity and the resulting fabric has a rather random appearance that doesn’t look good with a defined lace pattern like shells, V-stitches or pineapples.

I tried rows of single crochet worked in the front loop but wasn’t pleased with it. After a little experimenting I decided on one of my other favorite stitches the “Up and Down” stitch (that’s what it is called in Betty Barnden’s “Crochet Stitch Bible”). This is alternating single and double crochets on the first row, then working doubles in the singles and singles in the doubles on the following rows. I start my rows a bit differently than Betty shows them in her book.

I like to begin each row with a single crochet and end with a double crochet. At the start of my second row (and each following row) I chain 1, turn and work a single crochet in the last double from the previous row. This creates a nice clean edge on the rows that I can crochet off of or can just leave plain.

I’m going to keep going on this swatch to use up my yarn and see how much fabric I create, I’m thinking this might become a cowl.  Now I have a project to work on while it continues to snow outside.

Nothing beats this Rollie Pollie needle felted sheep for cuddly cuteness! Join me for a fun Zoom class hosted by the @longmontyarnshoppe on Saturday October 9th from 12:30p - 3:30p.