This ongoing project of turning what was my Massage office into my Design office is getting a bit cumbersome.  At the moment this is the state it is in.

My dream idea of a well-organized and peaceful work environment does seem a bit out of reach.  Especially as I go thru my stash of fabric, yarn, threads, buttons etc…the more I discover I have.  I am in that stage of organizing, where the work you do seems to create a major mess.

It’s all good though.  Sorting thru the accumulations of 20 some years of creative supplies seems to inspire new ideas.  So I’m taking sketch breaks to note things down.

Then when I have a “dry” day, I’ll have loads of notes to get the well running again.  Admittedly I have rarely had “dry” days, but just in case.

One of the wonderful things about going to the Knit and Crochet Shows has been the opportunity to learn from other crocheters.  I’ve learned new techniques and finishing tricks both in classes and just sitting stitching in the lounge with others.  I’ve also discovered ways of looking at crochet fabric that I had never considered.

I’ve always thought of myself as an “outside the box” kind of thinker.  But one of my teachers at Chain Link this year showed me that she isn’t even thinking “inside the room”.  This would be the lovely, talented and brilliant Dee Stanziano.

I had the pleasure this year of taking the class “Pushmi, Pullyu” with Dee.   She has an amazing eye for crochet fabric and an insatiable curiosity about how it is created.  Her understanding of how the fabric of crochet can be influenced by the way we hold our hooks and manipulate the yarn is a bit mind-boggling.

Dee promised by the end of her class we would be forming new neural pathways and looking at our crochet in a whole new way.  She was correct in her predictions (and when she made us crochet with our non-dominant hand her promise that we would curse her name also came true).   I am now having a great time playing with different approaches to creating stitches in my crochet designs.

In many ways Dee is contagious in her enthusiasm for Crochet, the CGOA and just life in general.  We should all be so involved and alive.  I strongly urge you, when the opportunity arises, take a class with Dee.  It will be money well spent and will gift you with the opportunity to see your crochet (and possibly even life) from a Different Point of View.

My gorgeous yarn and beads from the Chain Link 2010 Market.

One of my favorite vendors to see again was Leslie Pope of Twisted Sistah Beads.  She always has a beautiful array of beads in every color you can imagine.  As well as the perfect sizes for using with yarns.  I actually ended up making 3 visits to her booth.  I bought beads all 3 times, but the third visit I also couldn’t resist these wonderful charms.

Those hands were too cool.  Remind you of anything? 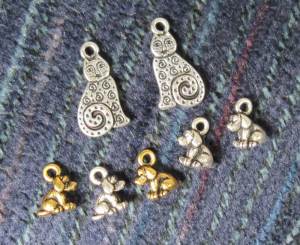 The rest of the charms I purchased for some fun gift making (I’m thinking about Christmas gift giving already).

I also made a search for some laceweight yarns as there is a sad lack of laceweight in my stash. Habu Textiles had so many beautiful ones to choose from.  But the lovely colors of the Bamboo Lace finally won the place of honor.

Then I stopped into another booth to purchase a funny mug with goofy sheep on it, and spotted the Classic Elite Silky Alpaca Lace.  I decided the laceweight would pack down fairly tightly so purchased 2 balls.  Of course once I got it home and read the label closer I did have a bit of a giggle. 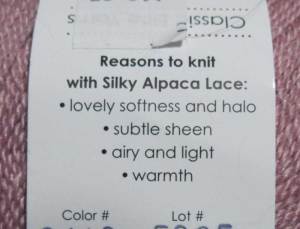 No matter….I think I’ll get good results with crocheting it too.

One of my favorite John Lennon songs is “Beautiful Boy.”  I particularly like the line about “Life is what happens to you when you’re busy making other plans.”

I have found that statement to be so true throughout my life.  Just the other evening I was reading one of the forums in Ravelry and noticing the interesting images folks adopt for their Ravatars.  I had originally thought that I would be changing my own Ravelry image every month or so, even if it only meant switching the background colors for my trademark hands logo.

But now my pinkish background represents “me” to so many folks.  The crazy coloring frenzy I had one evening with a printout of my logo has become my brand.

This got me to thinking about the many times the direction I thought I was headed led me somewhere entirely (and often wonderfully) different. A prime example is this journey as a crochet designer and writer on healthy crafting.

Then curiosity led me to take an online Crochetville class called Designing for Print Publication with Mary Beth Temple in March 2009 .  I was pleasantly surprised when my “homework” proposal was accepted for publication by Crochet! Magazine.

This journey has unfolded with surprises at every turn.

Maybe the funniest surprise is how the whole thing began.  It all started with cloth diapers. Yes, an unlikely beginning to the road of crochet professional.

I was cloth diapering my youngest son and a neighbor friend recommended a few useful internet sites for me to check out.  I had spent very little time online before her recommendation.  But suddenly I found interesting blogs to read and so many sites about cloth diapering, which led me to a yahoo group promoting wool soakers.

That group led me to Ravelry. In April 2008 I received my invitation to join Ravelry.  Through Ravelry I discovered FreeForm Crochet,  the CGOA,  and I attended my first Knit and Crochet Show.  I have taken numerous wonderful classes with talented teachers and expanded my crochet skills in directions I had never dreamed of.  My passion for crochet has been re-ignited and I have officially joined the ranks of Crochet Designers.

This most recent Knit and Crochet Show (Chain Link) was the best ever.  I sold more designs, and took fun and inspiring classes. Best of all, I reconnected with wonderful stitching friends that I have met over the past 2 years thru Ravelry and going to shows.  My life as a solitary stitcher on a mountain is over, and I am forever grateful to Ravelry for making that possible.

Happy Valentines Day! Hope everyone has a day full of friendship and love.