I am very fortunate to live in the mountains of Colorado quite near Estes Park.  Amazingly, I’ve never made it to the Estes Park Wool Market, despite it being held only 40 minutes away.  So this year I vowed to change that.

I made plans with a friend to join me on my outing. She and her 2 small daughters were to come stay at my house for the weekend.  Then Saturday (possibly Sunday too) of the Market we would trek over for some fun times learning about the wonderful animals that provide much of the fiber in our favorite yarns.

Unfortunately, the weather folks predicted that the weekend would be very rainy and cold.  My friend felt it would not be a good plan to drag small children around in freezing cold wet weather.  So she decided to stay in her warm home for the weekend instead of visiting my very cold mountain.  Who can blame her.  I was thinking it would be quite nice to be somewhere sunny and warm as well.

But being the intrepid venturer I am, with admittedly a more than minor addiction to fiber loveliness in the form of yarn, I planned to don my armor of rain gear and woolie warmness to explore the Market.  I was aided in my resolve by 4 of my stitching pals from Denver.  They were making the commitment to drive all the way up from the big city. The least I could do would be meet them for a few hours of yarn petting.

Yesterday dawned gray and dismal; when it wasn’t raining it was misty.  A bit reminiscent of a few of my trips to Scotland in late June.  I had second (and third) thoughts about the wisdom of this adventure, but had talked to my friend Sheila the night before and thought it would be bad form to bail out.

My reluctance must have slowed me down, and I left later than originally planned.  When I drove out of my driveway the rain had turned to a wet sort of sleeting mess.  I threw out a random prayer to any listening deities to please let the weather in Estes Park be a bit nicer.

The drive there wasn’t too bad and,  after a minor adventure with fellow travelers who were distracted by the Elk having a kip in a roadside meadow, I arrived at the Fairgrounds.  Paid my $5 for parking to the young boy scout (who apologized for the soggy state of the change he gave me for the dry $20 I paid with) and following the guidance from the various traffic directors was safely landed in a parking spot.

I swiftly grabbed my raincoat and my bag containing the items I thought necessary to the outing.  Then squelched along the parking lot to the entrance to the event.  Arriving at the gate I observed an information kiosk, where I checked to see if there was a fee for the event. 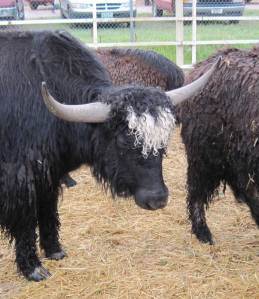 I was happy to learn that there wasn’t, as I was uncertain how long I planned to stay…and it would have been far too depressing to fork over my hard-earned cash to only turn around and depart.  I quickly made a beeline down the row of stalls and such to the Vendor’s Barn.  Completely missing this pen of Yaks (I took their photo afterward, they didn’t seem too happy about the weather either).

I had already attempted to contact my friends on their cell phones, but had only reached voicemail messages.  I knew they had planned on arriving around 10:30 and we were to meet between 11 or 11:30 in the Vendor Barn.  So I figured their phones weren’t working in Estes and that they had given up on me making it there.   At this point it was noon.

There was lots of lovely yarn and interesting things to look at in the barn and it was relatively warm and dry.  So I decided to take a turn around the various booths and keep an eye out for my friends as well.  I had been wandering about for nearly an hour, looking more at the other market attendees than the goods on display, when my cell phone rang.  It was my friends, they were just arriving at the Festival and would be with me shortly.

By this time I had made plans for the adoption of at least 2 skeins of yummy yarn.  But I swiftly marked their location on my map and dashed off to be at the entrance to meet my friends.  A happy reunion and breathless explanations and we were all soon plotting a plan of attack for perusing the vendors wares.

I must say, these gals are truly amazing in their thoroughness.  The next few hours flew by in a frenzy of yarn and fiber perusal and acquisition.  I stayed within my budget, but temptation was everywhere…made even more so by the fact that one or the other of my friends’ eagle eyes would spot things that I would have missed otherwise.  Helpful, and not so much.

We finally emerged from the Vendor’s Barn and I took some photos of a couple of young Alpacas (as well as the earlier photo of the Yaks). 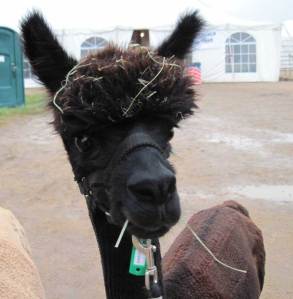 It was unanimously agreed we were all hungry.  There was a wonderful little booth that had stuffed gluten-free crepes so we stopped there while Sheila and I each purchased one.  Then we all headed to our vehicles since it was far too cold and wet to sit at the provided picnic tables to eat.

I came away from my experience at the Wool Market with a new love and appreciation for the talents of my stitching pals and a head full of ideas and inspiration for new designs.  I’ll be flying off in 23 days for the Chain Link Conference in New Hampshire, so some of these ideas will have to wait for me in my sketch pad.  But I will hope to attend the Festival again next June and I will be buying myself some comfortable wellies to wear if the weather decides to be as miserable. 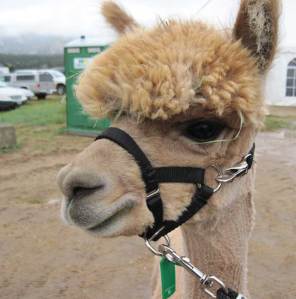 3 thoughts on “A Wet and Woolie Day”