Okay, I know you are surprised to read that title in my blog, being as I am a crochet designer.

But I actually did design a knit hat recently. My younger brother Cy and his girlfriend, K, were here at Casa Graves the weekend before Thanksgiving for an early celebration. We did this early because K owns a retail shop and couldn’t be away during the actual Thanksgiving weekend.

While they were here I was teaching her to crochet and re-teaching Cy to crochet.  After awhile though K decided she would rather knit. She has been knitting since she was very young. But she has only knit rectangles. She said she primarily knits scarves.

So I grabbed a ball of yarn for her and she cast-on and began knitting away.

Meanwhile, Cy and I were crocheting hats and I was teaching him some of the more advanced crochet tricks I’ve acquired over the years.

When I finally started paying attention to what K was making I realized she wasn’t going to have enough yarn to make much of a scarf, but she did have enough stitches that she could make a knitted hat.  I asked her if she would like to have a hat from what she was knitting.

She was thrilled with the idea. So I told her to keep knitting until she had a long enough length to go around her head. Once she got to that length she was to bind-off and I would show her how to turn the length of fabric she had created into a lovely hat.

K was on a mission from that point onward. They were planning on leaving early Monday morning, so she wanted to finish before they left. By Sunday, after we had dinner, she had finished her knitting and was ready to bind-off.  She said it had been awhile since she had knit and she wasn’t sure if she remembered how to bind-off, could I help.

Yikes! Well, with the warning that this could be the blind leading the blind, I was game for it. Amazingly I actually remembered how to bind off. Soon her knitted fabric was ready to be transformed into a hat.

Now, she had been knitting pretty fast and her stitch count on every row wasn’t always the same, but I told her not to worry. This would become a “design element” in the finished hat.  We looked at the fabric and decided one edge was a bit straighter than the other, so it would become the “brim” edge of the hat.

I next set her the task to whipstitch the cast-on and bind-off edges to make a tube, lining up the “brim” edge so it matched on the seam line. Since her fabric was all knit stitches, ie…Garter stitch, there wasn’t really a right-side or wrong-side of the fabric to worry about.

Once that was done I had her take a doubled length of yarn (about 10″/25 cm)  and sew a running stitch on the “right-side” of the hat an inch down from the lowest point of the top edge.  We then pulled the yarn tight and closed the crown of the hat. The resulting gathering of the top edge created a sort of rosette on the crown.  I had her knot the yarn then tie a pretty bow and trim up the ends. 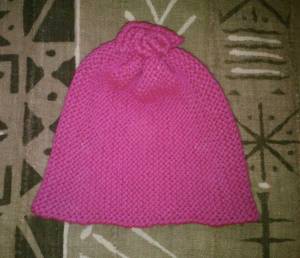 Of course, we were having so much fun with all the knitting and crocheting I didn’t even think to take photos of any of it.  So this is a picture Cy took for me after they got home.

I got the biggest kick out of how happy she was to have made a hat. I suspect there will be more hats in her future. And that is my story of how I, the crochet designer, designed a knitted hat.

Funny thing is, I have an idea for another simple knitted hat, so I may have to find time to pick up my needles very soon and work it out.

2 thoughts on “Knitting a Hat”

Happy Valentines Day! Hope everyone has a day full of friendship and love.