The first full weekend of June was the Annual Estes Park Wool Market. In 2013 I attended it with my friends April, Brenda and Renee’. All 3 of them spin and Brenda convinced me to give spinning with a drop spindle a try. Though I’ve not had many opportunities to practice my minimal skills since then. Last year I purchased some gorgeous dyed silk fiber to spin. It is waiting patiently for me to find the time to attempt it.

This year April came out to Colorado with her husband, though Renee was having fun at the beach with her family so couldn’t make it. Brenda and I met up with April at the Market.

Unfortunately I didn’t get to spend as much time with Brenda and April as I had hoped. Instead I spent most of my time at the Market on Saturday visiting with the folks at the Bijou Basin Booth and at the Buffalo Gold Booth. I purchased some gorgeous yarn and hope to have a few designs to show everyone using these yarns by Spring 2015, earlier if I can manage it.

I was very intrigued by the Buffalo Gold  buffalo down yarns. They are supposed to be very durable and not inclined to shrink like wool. The hank of “Haven” is destined to be used in a fingerless mitts design. I’ll be posting about that design once it is available.

I caught the end of the Sheepdog demonstration, I’m always amazed by the concentration that the dog has. The dog in the photos is a young one that is just starting to learn the ropes, I was still impressed.

I did get to spend some time visiting with the Goats. I’ve been dreaming of getting a few goats just because they are great animals for keeping the underbrush trimmed down for fire mitigation. I also just like them, they all seem to have strong personalities. 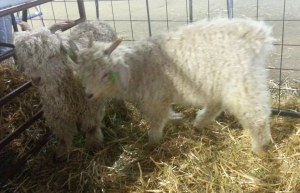 The white Angora goat in the front is a 3 month old male and was for sale for $50. I was really tempted, but I think my husband would have been a little startled if I brought a goat home. It can be a bit confusing for some folks, but the fiber from an Angora Goat is Mohair. Actual Angora fiber, as you see it labeled in garments or yarn, is from Angora rabbits.

Before we left the market we all went in to see the rabbits. Brenda got a bag full of lovely angora fluff to spin with and we all admired the fuzzy rabbits. They always make me think of cuddly toys they are so furry and poufy.  There were even a few for sale, but I figured my husband wouldn’t be any happier about a surprise bunny, than he would be about a surprise goat.

After we had all finished at the market we headed to downtown Estes Park for some dinner. It was nice to have a bit of time to relax with April, Brenda and their husbands. This was the first time I had been back to Estes Park since the September floods and it was good to see that the town was making a strong come-back.

When I got home I showed the boys the photos I had taken at the show and they begged me to take them the next day. So the following morning we loaded up the car and headed over again for a few hours of visiting animals.

The boys enjoyed meeting some Paco Vicuna. One had been recently sheared and the other had about 2 inches of fleece. They enjoy feeling the softness, but they found the little herd of baby Vicuna to be very adorable. The babies weren’t interested in being pet, but they didn’t mind being admired.

The rabbits were having judging going on, so they were all getting spruced up and the fluff was flying as bunnies were brushed and made to look their best. I was admiring this handsome grey French Angora Rabbit. There were even some bunnies that weren’t Angoras. A few lop-eared bunnies were there to be sold and are supposed to be really nice pets.

There was a lovely fluffy little rabbit, he was full-grown though no bigger than many of the youngster bunnies, who was super friendly and snuggly. A Lions-head something or other, can’t recall the name of the breed, but if he had been for sale we might have ended up with a bunny.

Finally we headed off to meet the sheep. There was a lovely Shetland Ram that a woman was showing. He was on a lead and snuggled up to her like a dog. The boys were good about asking permission to pet him and he loved the attention. His wool felt just like most of the Shetland wool I’ve worked with in yarn, so that was fun to experience.

She had some lambs for sale and we walked all around the sheep stalls looking at the various lambs. This beautiful little Shetland lamb really caught my eye.

The boys were very entertained by this sweet little lamb. He was quite vocal and bouncing around his pen. My best guess was that he is a bottle-fed lamb, as he had no fear of humans at all.

My favorites were still the goats though. This sweet little goat and her pen mate were just as interested in me as I was in them. 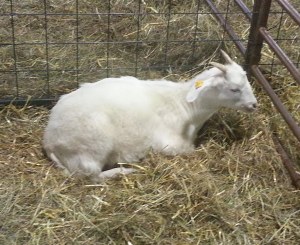 The cashmere goats were very soft to pet.

Our last visit was to the alpacas. Only good picture I got of them was this pen of youngsters ranging in age from 6 months to 1 year.

I told my husband that I needed a small herd. Just one goat, one sheep and an alpaca. He didn’t agree. Ah well, maybe another lifetime for that dream to come true.