April is National Stress Awareness Month, so today I thought it appropriate to share a story that I’ve never told on the blog. Last week was the celebration of my youngest son’s 9th birthday. And it got me thinking about how strange my journey to motherhood was. The short version is 8 years, 7 pregnancies and 2 healthy babies.

I had my boys a bit later than is the national average for motherhood in the USA, and quite a bit later in life for the average globally. Some of that delay was planned and some of it was a surprise.

When my husband and I met I was just beginning to attend school to become a medical massage therapist. So we didn’t want to start our family until I graduated. Once I graduated though, we were ready to begin our family.

I got a job with a local massage therapy office and began to work steadily. Just shortly after Christmas that year I discovered I was pregnant, 4 days later I lost the pregnancy. I had worried about being able to get pregnant, I had never considered the option of loosing a pregnancy. I was devastated.

Unfortunately this wasn’t going to be the only time this happened. I had 3 more pregnancies over the next 2 years that didn’t work out. My husband and I went thru tests and looked at various options for fertility treatment. But after a lot of research and discussion we decided that we wouldn’t do anything other than the diagnostic tests we had already done.

Mixed in among this rollercoaster ride of trying to have a baby was my return to crochet. I crocheted a lot as I stayed up late wondering if I would ever be a mother. I crocheted afghans for friends and family for Christmas, birthdays and other holidays, plus miles of scarves for charity. The hours of simple soothing stitches helped ease some of my heartache and gave me space to just be and not have to explain my sorrow to others. 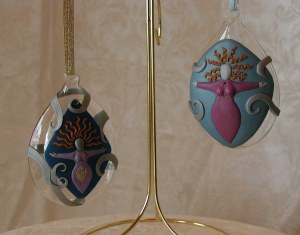 When I wasn’t crocheting or working at the massage office, I was in my art studio. At that time I was working a lot with polymer clay.  I was interested in doll making and of course primitive fertility images. I hadn’t reached my “Ah Ha!” moment where I would be adding crochet to my artwork yet. I created a number of images that I made molds for and then played with the plethora of color options available in polymer clay. 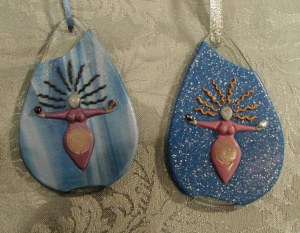 In the Spring of 2002 I became an Aunt for the 3rd time. My youngest sister had a baby boy and we were excited to meet him. We went to Kansas for his christening in April and I spent as much time holding this wonderful little fellow as I could. I told my sister I would just be the auntie that spoils her nephew rotten, since it looked like being a mother wasn’t in the cards.

We were leaving late that May for a 6 week-long trip to the United Kingdom and France. Part of the trip was for my husband’s work and the rest was for us to play tourist.  I was taking an indefinite leave-of-absence from the massage office.  I had also begun the lengthy process of filling out paperwork to return to college, I was going to tackle getting my pre-med degree to become a pediatrician. If I couldn’t have kids of my own, I would help take care of other people’s children.

Finally I had the house ready for our sitter and all our pets were with their care-givers. I hopped on a plane and flew to Manchester, England to join my husband. He had been there for over a week already. When I got there I was exhausted. Long flight plus very little sleep as I prepped for the trip. 2 days later I was still exhausted and a little suspicion had begun to niggle me. 5 days into the trip I finally caved in and purchased a test kit from the local pharmacy. Sure enough, I was pregnant.

This time was different though. I was the classic ill in the morning and tenderness in my body. A phone call back to the States to speak to my doctor was a big comfort when she reassured me that the symptoms I was having were all positive signs. We still managed to enjoy our trip, but I was a little worried.

When we returned home one of the first things we did was go to the doctors office for a check-up. The nurse did an ultrasound to determine how far along I really was, since my cycle calendar was a mess with all the traveling. They told me I was past 10 weeks and that it would be very rare for me to miscarry at this point.

When we got home that day I went to my yarn stash and took out some cotton yarn that I had been saving to make a blanket for “my” baby. I felt a little superstitious but wanted to make this blanket, plus I really needed a crochet project to calm myself. I think this is the first time I consciously realized that crocheting was my way of maintaining my mental health. 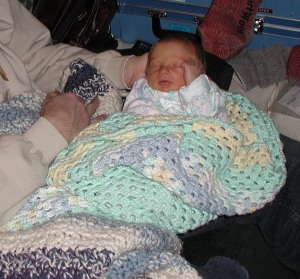 I made a simple oversized granny square for this blanket. I worked on it steadily for about 2 months and when my baby boy was born in January of 2003 I wrapped him up in his blanket.

I continued to crochet after his arrival, though not as frequently and sometimes I only had time for a row or 2 each evening. But I now knew that crochet was a wonderful way for me to manage stress, and I knew I was a happier person when I crocheted. 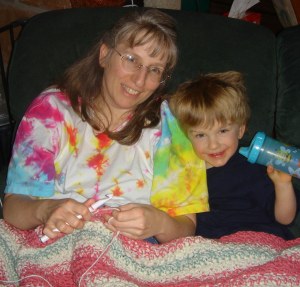 Life kept rolling along and after another miscarriage I had a second baby. By this time though I knew how important crafting and in particular crochet was for taking care of myself. In the picture above I was crocheting an afghan for my mom’s Christmas present, cuddling with my almost 4-year old and the baby #2 (also known as “the Bean”) was sleeping in his basket in front of me.

Even now with my busy crochet design and teaching schedule I try to always have a crochet project going that lets me just relax and unwind. For me lately that is usually hats; relaxing crochet and the joy of finishing a project pretty quickly.

The Craft Yarn Council released a video about the stress reducing effects of playing with yarn called “Stitch Away Stress” in honor of April being National Stress Awareness Month. Their video focuses a little more on knitting, but crochet is in there too. You can check it out here. Visit the webpage at the Craft Yarn Council to find even more fun facts about the stress reducing effects of crochet and knitting.

So how about you? Do you find crochet (or knitting) to be your un-winding activity? If you haven’t learnt to crochet or knit, maybe now is the time to do so. It’s a great way to be kind to yourself at the same time you can make something useful.

5 thoughts on “Art, Crochet and Healing”