For those of you that have been following my blog for a while, you have read about Karen Whooley on here before. I was very fortunate when I signed up to become a CGOA Associate Professional (in 2009) that I got Karen as my mentor. It was a somewhat random pairing that turned out to be very fortuitous.  We have so much in common and get along great. I graduated from being Karen’s mentee, but she has become a good friend and colleague in the crochet business. 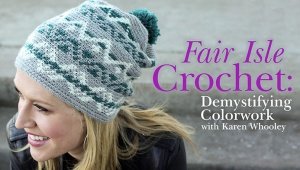 Today I’m pleased to be a part of the blog tour for Karen’s new class with Craftsy.com, Fair Isle Crochet: Demystifying Colorwork. I’ve taken classes with Karen at the Knit & Crochet Show and the Crochet at Cama Retreat. She is an amazing teacher with a comprehensive understanding of her craft and endless kindness and patience in teaching it to others.

And Karen has provided a fabulous gift for you my dear readers, you can use this link: 50% off the fee for the Fair Isle Crochet at Craftsy.com

I’ll definitely be taking this class at Craftsy myself very soon, but for this blog tour I wanted to interview Karen. It’s always fun to interview my friends in the industry because I learn about aspects of their crochet (or knitting) journey that I hadn’t known before. So without further fanfare, here is my interview with Karen:

When did you learn to crochet and who taught you?

I learned to crochet in 1974! My Italian Grandmother who was way ahead of her time thought my sister and I watched too much TV.  I was 7 years old when she put that hook in my hand. In 2 hours I had made a covered coat hanger with the traditional colors of the 70s – greens and golds.

Are you willing to tell us how long you’ve been crocheting? And if Yes, how long has it been?

This summer it will be 40 years! ACK!

How long have you been teaching Crochet?

I’ve been actively teaching crochet since about 1998 or 1999.  At first it was with smaller groups in the San Fransisco Bay area, then in 2000 my family moved to Washington state and I started teaching at local shops in 2001.  I started teaching on a national level in 2004!

Who were your first students?

My first students were friends in my neighborhood in California. When I got to WA, I took over teaching at a local store called Pacific Fabrics and Crafts from a fellow Guild member and designer who decided to retire. You may have heard her name, Bev Dillon

What inspires you to teach crochet?

I grew up in a teacher’s household.  My mom taught 1st grade for 9 years before I was born. Then she returned to teaching (the 3rd grade) once I got to High School. So teaching is in my blood!  But I specifically teach Crochet because it is a craft I want to see go on forever!

When I learned to crochet, my grandmother and I were the only two people I knew that crocheted.  In 1996, when I became a stay at home mom after the birth of my first child, I discovered the whole world of crochet out there on a Compuserve List-Serve group called Crochet Partners! (Am I dating myself?) But all those years of not knowing many people in the world that crocheted, when I was given the opportunity to teach… I did!

Did your mom give you advice on teaching when you started teaching crochet?

Mom didn’t so much give me tips as much as my watching her in action in the classroom. Though growing up, she did tell me stories about how nervous she was that first year of teaching, not so much with the students but dealing with the parents. She just pushed through and got over the stage fright.

When I was working full-time as a System Support Engineer for a Company that developed Software for Dental Offices, however, I was asked to teach classes to our field personnel on the system.  I was put in a class to help me get comfortable with that.

What inspired you to explore Fair Isle techniques in Crochet?

When I was a teenager, I had this beautiful bulky knit fair isle sweater. It just fascinated me.  At the time, I didn’t know how to knit, but I was dying to learn so I could make my own sweaters using the Fair Isle motifs. It wasnt until I was 37 when I learned to knit, and then a couple of years later I learned stranded knitting. It was at that point I knew I could replicate fair Isle knitting in crochet!  So after lots of trial and error (which I talk about in the class with samples!) I hit upon what I felt was the best replication I could get of Fair Isle stranded Knitting in crochet.

You knit and crochet, do you find Fair Isle easier in crochet or knitting?

Well, honestly it depends. Because I have been crocheting longer than knitting, I find it easier to crochet but knitting isn’t hard. The difference for me is that in knitting I have all those live stitches with the potential of dropping one or more.  In crochet that isn’t a factor. Because both charts are the same and are read the same way, either one works for me and depending on the look I am going for, I will swap out one for the other.

I love the hat in the promotional photos for the class, was there a particular inspiration for that design?

Mostly it was that I wanted something that looked like a traditional Fair Isle knit hat.  After pouring through Fair Isle motif dictionaries, I put together some of my favorites.  I chose traditional greens and greys of the Shetland Islands and there was my hat!

The hat looks like something that would appeal to the teenagers in your house, are there requests being put in for hats from your family?

Funny you should ask. That hat is my 15-year-old daughter’s favorite piece from the class. Teal green is her favorite color.  But she doesn’t want me to make it now as summer is coming.  Probably for next year!

I know you must be really excited about offering classes thru Craftsy.com, what do you like the best about this style of teaching?

I think what I like the most is that the class is there forever. Students have the class to go back to for help or just to remind them of some part of Fair Isle Crochet they may have forgotten. The Computer geek in me loves the platform. The fact that they can take notes right on the video for themselves is just amazing. And those notes are there for them to access forever too!

I also love the fact that I can reach students all over the world!  I don’t have that opportunity with teaching live. Lots of times I’ve gotten emails from potential students telling me that they cannot attend an event because it is just too far or too costly. They want to know if I am ever coming to their area. That isn’t always going to happen, so this way they can actually have me teach them in their living room! Or office, or even on the couch next to them!

Do you have a preference of designing or teaching?

That is a hard question because I love them both.  Because of the way I was taught to crochet, by a non-English speaking grandmother, the techie in me loves the challenge of creating something from scratch. But there is something about that light bulb moment students get that gives me great satisfaction. It’s like a visual confirmation that the craft will continue.

Do you dream about crochet? About yarn?

Oh gosh, all the time!  Some of my best design concepts come from dreams! Sometimes when a particular pattern is not working out, I get the solution in a dream. I cannot tell you how often that happens.  In dreams and on the treadmill walking.  Those are my two go to places when I need to work out something in crochet (or knit too!).

Thank you so much for taking the time to talk with me today Karen, I was wondering if you have any final words of encouragement for those that might be intimidated by Fair Isle and this class?

Thanks Andee for having me!

For those of you who may be intimidated by colorwork, this is definitely the class for you! During the class I break down every piece of the pattern, along with having tips in there for you. I have already had students who bought my Fair Isle books, only to be intimidated by all the color changing, send me photos of their swatches from the class. They are excited about how I walked them through the process.

The cool thing about these Craftsy classes is the platform. The “Pause” and “30 second repeat” options allow you to go back and see once again what I just showed you. And you can do that as many times as you need until you get the idea down.  You can also ask me a question at any time, and I will be answering! So don’t be afraid to try it!  I’m there to help along the way!